‘one of America’s great silent clowns, the unsmiling but game little fellow who always comes out on top whatever the odds.’

Indeed, he never smiles in his films and they are all the funnier for that. He trained in vaudeville and made in quick succession The Shepherd, One Week, The High Sign, Convict, all in 1920. Further features followed, until in 1926 he made the film for which he shall never be forgot, The General, which still holds  its place in the canon of film comedy masterpieces. In this film, Keaton’s character has two loves, the train on which he works as an engineer and his girl. Set at the time of the Civil war, Keaton is unable to enlist because he is more valuable as engine driver than a soldier. thinking Keaton a coward, his girl deserts him, only to be captured by thieves who steal the train whilst she is aboard. He must retrieve the train and the girl, going through enemy lines and returning a hero. 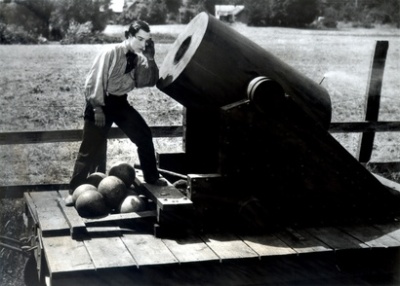 Buster Keaton in The General

The film’s many sight gags such as Keaton riding on the train’s crossbar and moving a plank of wood with another are a joy to behold. its a film that can be watched endlessly, so rich are the visual details.

Sherlock Jr, was made in 1924, finds him playing a projectionist who goes through the film attempting to solve a crime. The film opens with a proverb stating that when a man tries to do two jobs neither will be completed satisfactorily. After being found guilty of a crime he didn’t commit, Keaton’s character falls asleep at his projector. then in a sequence uncannily similar to the Purple Rose of Cairo, his character splits in two, and he floats out of his seat into the the cinema screen. He joins the actors in the screen, and his alter ego is now Sherlock Jr, ‘crusher of criminality’; a master sleuth. the film within a film sequence takes up half of the running time and is a delight, Keaton doing some really daring stunts; riding a car into a lake, riding on the front of a motorbike, even after the driver has fallen off. that sequence is the epitome of his talent, a sequence that builds splendidly, using crosscutting to heighten the tension, at one stage he appears to narrowly avoid a speeding train, and goes through a tug of war at a stag party.

A less frenzied film, The Navigator takes place aboard a ship.  Keaton’s character is a member of the idle rich, Rollo Treadway, who could have just stepped out of an F Scott Fitzgerad novel. Unable to marry the girl he loves, he deides to go on a cruise. Ending up on the navigator, a giant battleship, he meets another girl. They find themeselves bewildered by the most simple tasks, making coffee with unfiltered seawater, unable to open a can of corned beef. a few weeks later they have made contraptions which allow them to live reasonably well. all goes swimmingly until they reach land and are spotted by cannibals, who come at them with spears. These scenes may seem uncomfortable in today’s more sensitive times, however they are what the public would have expected when the film was made.

Keaton’s last great film is The Cameraman (1927). Keaton plays a street photographer trying to woo a film star, he becomes a newsreel cameraman and photographs a street riot. The film was remade as Watch the Birdie for Red Skelton with Keaton providing the gags but not getting any credit.