This is an amazing real life story that belongs in fiction, or a movie thriller…. Back when the movies had soul and America was feeling the aftermath of the civil rights movement, a young revolutionary by the name of Huey Long founded a radical movement. But this episode centres on what led a big shot producer to personally fund the leaders hideout in Cuba and provide legal support for a string of crimes that should have seen him die in prison. 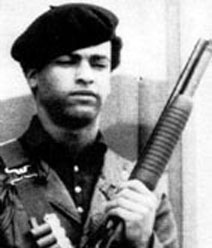 Newton’s bizarre leadership of the Panthers was known; he carried a swagger stick to be like Idi Amin. More seriously were the exhortion rackets where he shook down pimps, after-hours club owners and theater owners. Murders of others were carried out under his orders for perceived disloyalty to the group, There were regular beatings and pimping out of Panther women at the Lamp Post Bar.

Newton had a way of being tough on the streets of Oakland where he grew up but he concealed it from his respectable friends, both black and white, celebrities and political figures from the liberal elite; Jane Fonda, Leornard Bernstein, Jessica Mitford, Marlon Brando, all of which were supporters of the Panthers.

Schneider died two years ago. He was responsible for breaking down the the stifling control of the old Hollywood studio system and giving artistic control to a group of young first time directors. This is a period welll-documented by Peter Biskind’s book Easy Riders, Raging Bulls.  Schneider created the manufactured pop-group The Monkees. He used the profits from their TV show to make Easy Rider, which cost $360,000. Easy Rider went on to make 36 milion, almost 100 times the budget, and making it one of the most profitable films ever made. This figure led to Paramount giving Schneider a six picture deal made by writer directors.

With his success as executive producer growing exponentially, Schneider was able to support left wing causes. He donated to antiwar movements, especially Vietnam Veterans against the war, giving money to Joan Baez personally. He was friends with activists Abbie Hoffman and Daniel Ellsberg.

But after he met Newton – the official leader of the Panthers- he took an even greater leap – financially and politically – into Newton’s social world and psyche. Newton was a genuine revolutionary hero to many, He had actually shot a police officer in Oakland who was seen by the  left as a racist pig.

Bert had met Huey in September 1970. Bert had been involved – politically and romantically – with Elaine Brown, a dedicated member of the black panther party. She introduced them after Huey came home from his summer stint in prison. Bert provided direct entree to Hollywood and almost immediately they were as thick as thieves. Bert idolized Huey’s commitment to politics, seeing them as kindred spirits: Bert had overturned the studio system and Huey had his sights set on the world.

“Their bond was incredible,” said Elaine Brown. Bert often had Huey at his side, on vacation, at premieres, at his house. A big black panther ring now sat on Bert’s finger.

He was deeply involved and risked arrest when he helped Newton escape arrest for a string of crimes allegedly committed in 1974. Newton was accused of shooting a 17 – year old prostitute in the leg. He also pistol-whipped his tailor while being fitted for a suit. He also pulled guns on a couple of cops in an after hours bar. The money that Schneider spent helping Newton ran to millions of dollars.

So why was such a director in thrall to a gang of violent and often criminal gangsters? According to his girlfriend at the time, Candice Bergen, ”If Bert saw an injustice he would do something about it. And he could.”

By the early seventies the Black Panthers were falling apart. It seemed that maintaining focus as a revolutionary leader was hard when surrounded by cocaine and alcohol. Huey was a real intellectual, engaging his followers in discussions on free-will and existentialism – but as often happens with idealists- a gulf widened between theory an praxis. Huey eschewed the title of supreme commander yet acted ever more like a messiah gone astray. In Oakland he purged the party of radicals. Trying to get into the movie business didn’t help: working on their epic blaxpoitation film one night, Bobby Seale and Newton locked horns so violently that Newton bullwhipped him, Seale fled Oakland the next day.

Bert never asked Huey what happened in Oakland. He figured Huey was being persecuted. In the politics of the time the Panthers had been declared by J.Edgar Hoover the greatest threat to the country’s internal security.

Organising the breakout of a wanted man was never going to be easy. Schneider gave the project a name like it was one of his films, calling it ‘The Big Cigar’. To help him he enlisted ARTIE ROSS as the babysitter, Benny was the Jew, Huey was the leading man or the star. And Bert would talk about how they needed a location for their movie, and ‘transportation’ to get the star to the location.

It was Benny who came up with the idea of using a plane to get Huey from Mexico to Cuba, under the radar. He knew someone who knew someone who could do it. Nine had bona fide revolutionary credentials having fought for Che Geuvara. Bert gave him money to build an airstrip and find a pilot. This was a time when ‘airjacking’, taking over as plane, was a method of escaping the country.

Homespun cloak and dagger was new for Bert’s Hollywood clique. Nine stalled, saying his pilot had taken the money.Maybe there was no pilot and he was full of shit. Bert talked to ROSS in Tana’s, a popular hangout at the time. Ross’s plan was to use a boat in dry dock in Miami. It was a trimaran called Maya.   Artie was not political, he was scared of Huey, having seen him descend into plenty of paranoid scuffles. As Hollywood’s elite rubbed elbows in Dan Tana’s, Artie thought about seasonal currents and how to transport a fugitive over Caribbean waters. Bert talked to a lawyer friend, who was worried that the whole enterprise was illegal. Unlike the movies this was real life – and dangerous.

Bert was still in hiding, running The Big Cigar from his home in the Valley. Like Huey he was trapped, his underground railroad off the tracks. And he was having problems with his production company after several flops. Then Candice left him. His personality was so large that she felt she was disappearing. She no longer wanted to play Galatea  next to Bert’s power-hungry Pygmalion. Bert was heartbroken. He careened between women and tried to finish Hearts and Minds.

It took several weeks for Artie to ready the boat. A friend was brought in to be captain. Unfortunately, he was stoned. He missed a bouy and crashed the boat into a nine foot statue, Christ of the Deep, a beloved snorkeling attraction. They swam to Key Largo and hitchhiked back to Miami. Artie never sent a distress signal or tried to call the coastguard, he was afraid to answer questions. He let the beautiful boat he built sink to the bottom of the seafloor.

Bert’s Yelapa compound was, in the literal sense, the end of the world. And that’s what worried Huey. Boats were the only way in – or out. And he was worried the counterrevolutionary Federales would find him. Huey felt trapped and imprisoned. he spent time in solitary, and his meditation got him through, but the zen- like Huey was gone. He kept trying to hire local fisherman to take him to Cuba, even though Yelapa is in the Pacific. Huey didn’t want to live in disguise, like Abbie Hoffman. “Then give yourself up” Bert told him. “The worse that will happen is you’ll go to prison.” Then came a phone call. It was from Ross’s uncle Charlie. Charlie had found a Scandinavian with his own boat willing to transport. Bert didn’t ask his business but figured it probably wasn’t sightseeing. He wanted $15,000 if his boat was compensated. Bert agreed and asked Charlie his name. Charlie didn’t know, so he called him the Pirate.

Huey and Gwen set sail on Thanksgiving Eve, 1974. After months of delays they flew to Cozumel, as instructed. Bert stayed in Los Angeles, crossing his fingers that the Pirate would get them to Cuba.

They set off, Huey and Gwen sailing topdeck. Unaccustomed to sailing they became seasick. As the sea calmed, the trip became more pleasant. Gwen thought that the Pirate, with his scaly and parched skin, looked like a fish that had escaped the sea’s depths. When they saw land on the horizon, Huey contemplated the last leg of the jouney. The Pirate thought they were 15 miles from land. They were facing rough seas, and the journey was going to be even more dangerous, taking place under the cover of  night. ”We’ve come this far,” said Huey. “We have no choice.” The Pirate joked that he’d wait offshore to collect their bodies.

They inflated the Zodiac – a motorized craft and Huey and Gwen battled the rough waters. They immediately lost an oar. They  had five gallons of gas and the remaining oar if the gas ran out. Gwen brought her suitcase – packed with clothes, cosmetics and letter explaining their identities and revolutionary solidarity. The Pirate wished them luck as Huey started the motor and turned the nose to shore.

The only landmark was a lighthouse that flashed every 15 seconds. The motor whined for hours as Huey tried to keep the boat steady. They almost capsized with waves as high as five feet, but after eleven hours daylight revealed they were near shore but even nearer to a churning reef.  By then Huey had realised they had no life jackets, were out of gas and paddling with one oar. The reef raised violent waves that broke water over volcanic rocks. Huey tried to steer but the water was in control. He was a long way from Oakland and Beverly Hills.

On the shore onlookers gawped at the bloody and scratched survivors. Huey and Gwen were soaked, scratched and cut by the rocks when they were picked up by the local committee for the defense of the Revolution. Despite all the fuss about an introduction to the Castro regime, it took Huey hours to convince them he was a famous revolutionary who was here to join Fidel. Pointing  out that he had been invited,  a gendarme said, “well, we didn’t shoot you did we?”

And so finally Huey was safe at last. Back in Hollywood, Bert and the rest of Beverly Hills Seven quietly celebrated Huey’s successful escape. Huey wound up cutting sugar cane and repairing cars for a few years. Bert visited a few times, with Candice Bergen, Francis Ford Coppola and others in tow.

Huey read a script by Artie based on The Big Cigar and liked it. Bert was interested in making the film and Candice and Richard Dreyfuss were attached to star. Then, nothing. The idealism of the sixties was giving way to the apathy of the seventies. Social justice was out, franchises and long queues were in. Some people from that era didn’t last, Artie died of an unwisely administered hit of laughing gas inhaled from the tank. Bert offered one last parting shot when he brought back Hearts and Minds, winning an Oscar for Best Documentary at the Oscars in 1975. Standing in a three piece suit, receiving the award from Jack Nicholson, Bert offered “greetings of friendship to all American people” from the government of north Vietnam.