Either the Ukrainian feminist group are blazing a trail for feminism or they are setting the clocks back to the pre-Germaine Greer early days of the women’s movement.

One thing I know for sure is that it will be impossible for any of their detractors to describe them as hair-legged man-haters or any other hateful descriptions. All of their activists are noticeably young, early 20s at most. That’s roughly the same age as Germaine Greer when she wrote The Female Eunuch in 1969. And they appear to be well groomed and carefully presented at their demonstrations. At first they appeared scantily clad but began to appear in topless in 2009. 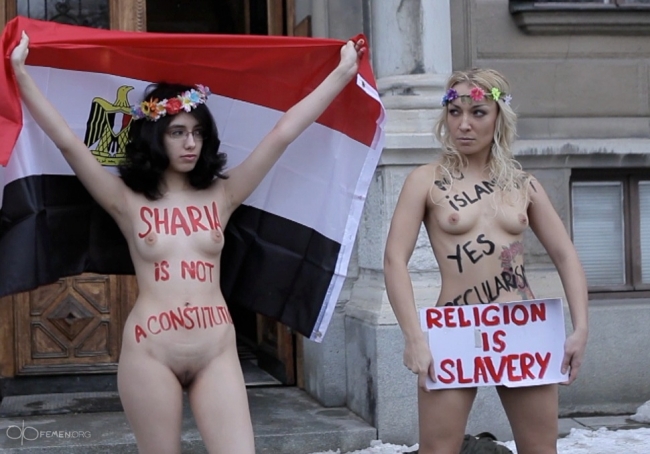 Their founding member is one Anna Hutsol, from Ukraine. At 25, the movement she created already has members in four continents across nine countries. It describes its tactics as ‘sextremism’, and its hundreds of volunteer members stand against sexual exploitation, organised religion and dictatorship.

Their guerilla tactics have demonstrated against the pope (releasing red smoke to represent the harm done by the church over the centuries); at the Berlin Festival to decry female genital mutilation; at the Davos world economic forum where they decried income inequality.

Whilst Ukraine is undoubtedly behind most of western Europe in terms of gender inequality, I wouldn’t be surprised if the group start to make waves over here, too. After all, how can women have the same rights as men when a man can be bare – chested freely but a woman topless in public can be considered obscene? The group’s topless protests could be used to combat the pernicious ‘lad’s mags’ culture. Everyone wants to look at women, so the group goes topless because they know that it is the best way to get media coverage.

Some have criticized them for going naked in very religious countries and exposing themselves to danger and violent attacks. Yet they continue to protest, and make the police   who arrest them appear ridiculous for manhandling semi-naked young women.

The group’s main activist Sasha Schevchenko said it may take a revolution, perhaps with some bloodshed, to improve the lives of women oppressed by Islam or dictators, or who are pressured into prostitution. Their most valuable service will be in educating the next generation to take up the fight themselves.