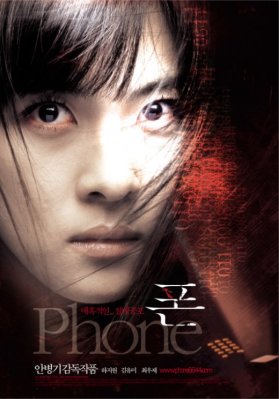 Coming after the internationally successful Asian horrors Ring and The Grudge, Phone is another film that finds supernatural horror in objects that are all around us.

Ceverly, the film makes use of the ringtone as a motif for the film’s scary moments. The familiar sound that we’re all used to is made to seem full of foreboding and dread. I was intrigued when I heard about the film. I wasn’t sure how the film would manage to make a satisfying horror and my initial feelings were that it would be too gimmicky. After all, in real life, if you are faced with a heavy-breathing stalker making nuisance phonecalls, you’d change your number wouldn’t you? That would make for a frustratingly short film of course. In a sense the phone aspect is actually a bit of let down and the film uses it as a MacGuffin element that allows a connection to be made between the past and the present.

Here’s a breakdown of the plot:

A female journalist has published a series of articles revealing the names of several high-profile men who have been found to have carried out sexual offences on underage girls. She receives several disturbing calls before deciding to change her number. A second plot strand involves her close friend who, after having been found infertile, had asked her friend to be a womb donor.

The child born through artificial insemination is now five years old, and as in all classic horror films from the Exorcist to the Shining, we know that child actors mean we should prepare for some truly freaky shit to unfold. So it proves. After answering the phone, the girl’s face scrunches up and her eyes swivel to the side in a classic demonic pose. It should be pointed out that even before this moment, the child was already looking particularly unattractive.

Finally, there is another plot strand, which involves a school girl the woman’s wife was having an affair with. It was this emothionally charged elememt of the film that I found the most compelling. The girl was a piano student and one of the pieces she learns to play is the Moonlight Sonata. I’m a sucker for any piece of classical music in films and the film uses this haunting piece brilliantly.

Phone was made in 2002, so several years before we all started using smartphones. The flip-lid phones the characters use made me feel nostalgic. Another highlight was the cinematography which bathes every scene in an unervingly bright light.

Finally, there was a subtletly to the two female performances that made it light years ahead of most American talk-and-slash horrors. Fans of Asian horrors will find this film right up their street. For others, it’s slightly confusing and is slow to start, but delivers a satisfying conclusion.