When Wayne Wang was brought out to direct the film of Amy Tan’s The Joy Luck Club, it must have seemed like a dream come true for fans of Asian cinema. With Oliver Stone as producer and several of the hottest Asian actresses in tow this looked like a surefire hit.

Unfortunately, it really missed the mark. Instead of being the moving epic that they were clearly going for, the film is a terrible and incoherent mess.

Let’s see: there are four daughters of four mothers, who are all members of the titular club. They moved to America it seems at different times and have made a point of bringing up their children as American rather than Chinese.

So the film had my interest but the flashbacks are totally intrusive and serve to prevent any sense of time and place. Now, like most American /Chinese productions, the characters speaking English. Not that this is a problem, as the daughters were brought up to speak English. Would adult Chinese women speak English alone with their friends? No, of course they wouldn’t. 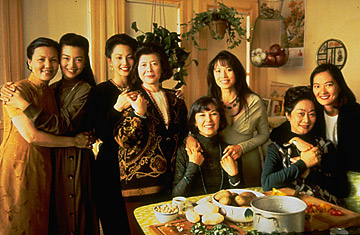 Now, in the flashbacks, the characters only speak Chinese. This is fine. These scenes are terribly melodramatic though. We are supposed to be shocked by the barbarity of Chinese culture and the way that women were treated. Each mother is given a flashback scene in which some awful event from the past is revealed, I lost interest after a while.

Then, the film takes us back to nineties New York, where their daughters live life of unabashed privilege, complete with yuppie boyfriends. These scenes feel like a Woody Allen film without the wit.

The Joy Luck Club does not deliver any emotional payoff. Each scene unfolds with the predictability of a thousand soap opera cliches.

Director Wang was never given the same budget to work with again. Vivian Wu appeared in Peter Greenaway’s The Pillow book, whilst  Lauren Tom played the role of Ross’s girlfriend in Friends. Fans of American-Chinese films would have to wait until Crouching Tiger Hidden Dragon for their next piece of Chinese cinema.