For five years, Do-yeon toiled away in Korean dramas, the likes of which have been long forgotten.

Yet her first film, Contact (1997), was an instant success. Starring alongside Han Sukkyu, Doyeon’s direct and warm personality endeared herself to audiences. It was perfect casting for her. The film was a response to the internet and the potential it offered for romance. Showing how much more advanced Korea was when it came to technology, it was made two years earlier than You’ve Got Mail. The film remains more than a period piece due to its story of people who meet online first and then in person.

In 1999, she gave two very different performances. The first was as a love-struck student and her adoration for her teacher; the second was as the adulterous wife of a laid-off businessman. Now these performances could hardly be more opposed. it was Harmonium that saw play a 17 year old girl, when she was already 27 at the time of filming. Yet if you look a bit closer you can find some similarities.

For one thing, they both look female sexuality in a very interesting way. Both characters are actively pursuing men, rather than playing more traditional and passive roles. In Harmonium, it is the school girl who goes after her teacher and shows him how strong her feelings are. The contented ending is of course not found in the film Happy End, with its bitterly ironic, tragic ending. The actress’s round, angelic face is fully exploited in the first film, but she is much more of a woman in Happy End.

In the film Untold Scandal, Do-yeon was unforgettable as a virtuous woman who finds herself unable to resist the predatory advances of Cho-Won. Now she was dressed in silks and decorous long dresses of the Joseon Dynasty but the actress revealed a deep sense of eroticism later on in the film. The actress had shown that she could film sex scenes in Happy End,  but playing a virginal woman convincingly was surely harder. The lady, who had been played by Michelle Pheiffer in Dangerous Liaisons, was a fascinating study by Doyeon into feminine chastity and virtue. 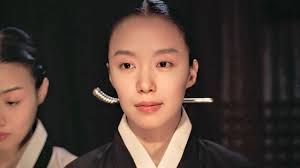 And then along came Secret Sunshine. As a woman who lost everything, the film was as tragic as it’s possible to get. The film was her most challenging role so far and it gave her a Cannes award for her trouble.

It became a common thing for Jeon Do-Jeon to die in her films, and this trend continued with the melodramatic Housemaid (하녀).

Here, her character was unknowing and naïve in the extreme. It was an extremely over th film in many ways with many distasteful scenes, but Dohyun kept it tethered to the ground, and made a touching mother figure to the family’s precocious daughter.

Another film, The Way Home (2013), showed her as a mother in a drugs smuggling operation going horribly wrong. The film would have been unbearable to watch if it wasn’t for the humanity that she brought to the role.

The Shameless (2015), showed a quite different side to her as a hard-drinking, cursing woman married to a crime boss. Even though the film wasn’t very interesting, she most definitely was, as someone who has usually played housewives this was the first time she had lowered herself so far. Her well-known eroticism was really to the foreground here.

Already in her forties, a time when many actresses disappear from the screen, she has shown few signs of slowing down.

Her most recent film was A Man and a Woman (2016), which showed her again in the role of unfaithful wife. She is now acting in the Korean TV drama The Good Wife (굿 와이프), but more films should be on the way, she is simply too good an actress to stay in television.

Speaking about her career, Dohyun has said one of the most gracious things about acting I have heard from a movie actress:

I enjoy acting so much that I have no need or desire to be called a great actor. This is partly my personality, but also the fact that I get so absorbed in acting, to where I can’t see or think of anything else. I can’t tell you what great acting is, but for me, it is to give everything you have with honesty, sincerity and persistence.

As she grows older, she becomes more interesting. Her face shows no sign of surgery, and she still gets top billing even in a culture which values youth above everything else. The result is that she is, and will always be, the most interesting of Korean actress.