“Produce 48” is the latest iteration of Korean competition programs which in the past have given us Wanna One and I.O.I. “Produce 48” is a  collaboration between Mnet and Japanese producer Yasushi Akimoto.

The show has recruited ninety-six female trainees from music companies in Japan and South Korea. They are competing to become part of the final idol group, which will be active for two and a half years.

From the preview clips, it’s clear that there will be as much focus on the girl’s interactions with each other as on their musical talent. Episode 1 introduces the girls, many of whom are from some of the most famous music companies such as YG and Starship. Many of the Japanese girls come from the section group AKB48 and it was interesting to note the differences in appearance between the Korean and Japanese singers.

While there was no music, the tension came from watching the girls reacting to each successive incoming talent, wondering who would take the chair marked ‘Number 1.’ I.O.I. member Jeon So-mi and Wanna One member Kang Daniel participated in the show’s first taping.

The show aims to create a ‘Global Idol Group’ and the public will have the chance to select their favourite singers when it comes to the elimination rounds.  The show has received impressive ratings so far and looks likely to be one of the most popular Korean TV hits this year, with the show’s contestants’ names becoming popular keywords online.

Although music shows aren’t normally my thing, it will be interesting to watch these beautiful women perform and talk about their lives. 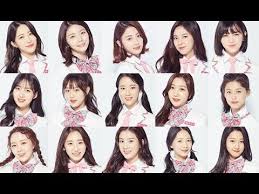