If you check out  out any tourist guide to Busan, you will find this place mentioned as one of the best places to visit for what Koreans call ‘Night View.’ Every time I ask for recommendations of where to go I’m always told that this or that particular place has the best night view of the city, so much that I’m wondering if anywhere in Busan is actually worth visiting in the daytime?

The Bay 101 is situated in Haeundae Marina, right at the bottom of Dongbaek Island (itself a great place to look at the sea at day and night). It’s one of the few buildings that really suits the landscape. Built in the modernist style, it looks out over the bay and offers views of the skyscrapers that dominate the skyline.

On visiting the BAy 101 on Saturday evening, I was afraid that it would be full of tourists. Actually there were so many locals and a few Chinese people, but hardly any foreigners. There are simply dozens of people sitting outside on the terraces. The tables were a close together but it wasn’t a big problem.

The food was worth trying, if not the ultimate reason to come here. Fingers & Chat is  on the first floor of the building where you can eat inside at the restaurant or sit outside (which is what nearly everyone was doing) which we did on Saturday evening. 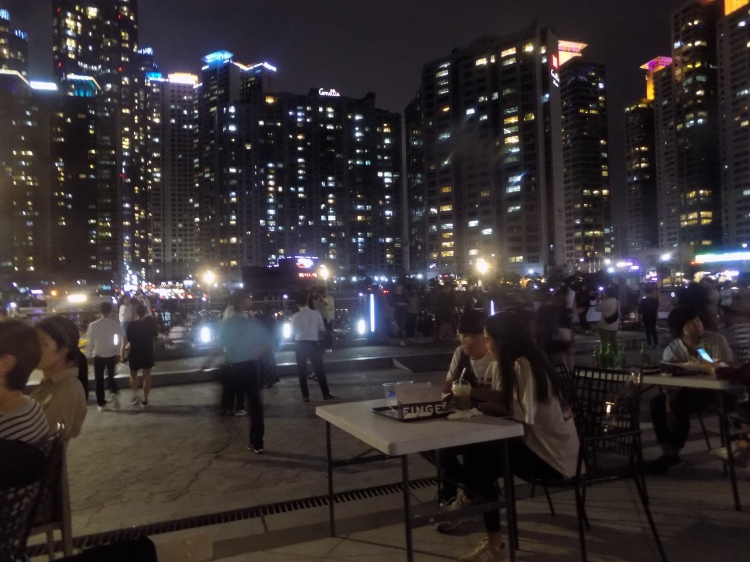 The menu gave us a choice of sea bass or cod, which was a good selection. There were several sides, including crispy dried pollack, which tasted like dried squid. They don’t give you a large piece of fish as you would get in England. Instead the fish is served goujon style in five pieces as you can see in the picture. 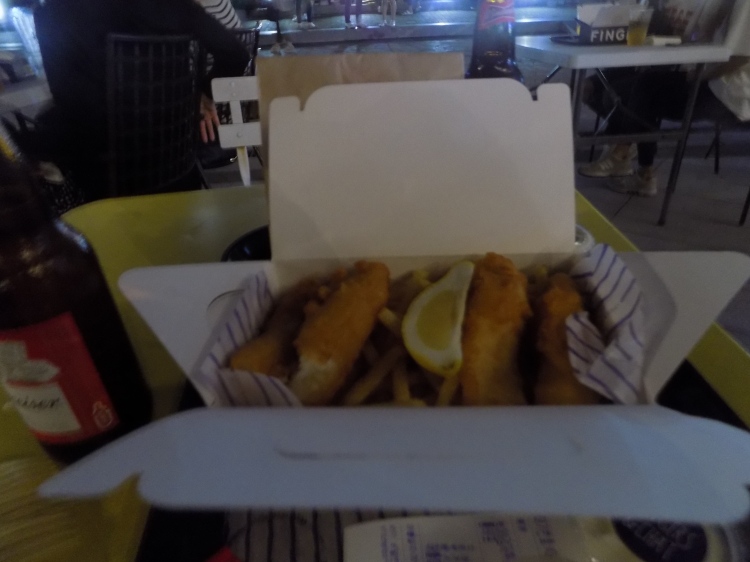 One thing I really liked was that they gave us two servings of mayonnaise as well as some creche. It showed that we were eating at a place which cared about small details. The fries were a little soft but I have yet to find anywhere which serves fries exactly as I would like them to be. We had to ask for salt and I’m surprised how people can eat unseasoned potatoes.

Everyone was having a good time with a fair bit of drinking going on. We stayed for an hour, after taking a few photos of the view. Personally, I’m glad that I have tried this landmark building in Haeundae, even if I’m not rushing to go back.

Ambience: 4 out of 5. There were a lot of people and some children running around.

Food: 4 out of 5. The Fish and chips were tasty and the mayonnaise was superb.

Price: 3 out of 5. You are paying for the location.

Service: we were served very quickly after standing in line at the counter for five minutes. After I finished I was about to take my tray inside when

Perfect for: a special romantic occasion. There were so many couples that I wouldn’t recommend going alone, unless you want to depress yourself.