Recently it occurred to me that there are few films that are made about black boxers. When We Were Kings doesn’t really count because it is a documentary.

One film that tells the story of the world’s greatest prizefighter, until Ali, is The Great white Hope.

Jack Johnson (1878-1946) was the unbdisputed champion, but he was dismissed by many white exponents of the sport who searched for a white candidate to beat Johnson. Johnson  ,met James J. Jeffries in 1910. The Fight of the Century, as it was called,was won by Johnson in the 14th round.

The aftermath led to race riots, and whites were angry they had been unable to find a ‘great white hope’ to defeat him.

Johnson was as confident in life as in the ring, ignoring attitides to what constituted propriety between races. All three of his wives were caucasion.

In many ways he was the first sports celebrity, being paid to endorse products and patent medicines, as well as an enthusiastic amateur race driver.

The film The Great White Hope is based on his life. James Earl Jones plays Johnson, and Jane Alexander his love interest. 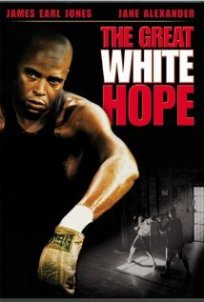