1. A Star Is Born, 1954. (Remake of A Star Is Born, 1937) George Cukor took the original idea (young star is created by her creator, and becomes more successful as he becomes obsolete) and made it the saddest film in history, and a showcase for the powerhouse performance of Judy Garland, as well as providing James Mason with one of his most sensitive roles. Key scene: at the Oscars, Mason’s character slaps Garland hard across he cheek, as she collects her first Oscar award.

2. Imitation of Life, 1959. A monumentally effective tearjerker. Lana Turner is an actress who becomes best friends with her black maid. The film shows every aspect of human weakness, folly and greed . Key scene: the funeral of the maid: a horse-drawn carriage, Mahalia Jackson singing at the service, and her daughter throwing herself at her coffin. In the fifties Douglas Sirk made several films in which women were the key players in tragic situations, this is one of his best.

Norman Jewison’s film has a sexy chess scene and the song The Windmills of Your Mind. The remake is a lot more fun and doesn’t take itself half as seriously. 4. The Man Who Knew Too Much

A rare example of a director remaking his own work, this is great until the end when Doris Day starts singing.

5. Scarface (1983) The Brian De Palma film goes way over the top with excessive violence. Still, many people prefer it to Ben Hecht’s original, including David Thompson.

Psycho (1998) – Gus Van Sant’s shot for shot remake of Psycho was unanimously slated on its release.

there are so many more examples, particularly egregious are American remakes of Japanese horror films, usually with Sarah Michelle Gellar, eg The Grudge. Also be wary of any attempts by stars to remake obscure european classics (Madonna doing Swept Away) for their own vanity projects.

Jennifer Connolly in another terrible remake. Honestly, don’t go there.

And the most unnecessary remake? Funny Games, since Michele Haneke had already made the film perfectly the first time around, but remade it, because he thought Americans wouldn’t be interested in anything with subtitles. 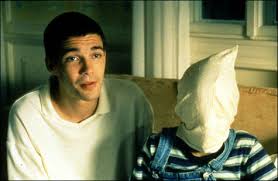 The original Funny Games, it is neither about a game nor in any way funny, your stomach will shrivel to the size of a pea when watching this film.