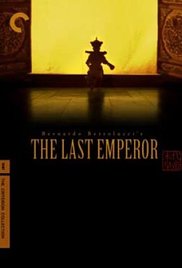 He was three years old when he ascended the throne and made history. Yet, his life was controlled by others and he was a puppet for the 6 years of his reign.

The Last Emperor is an incredible story. First off, when did any other film attempt, let alone succeed in trying to depict some of the most turbulent years of Chinese history?

As well as being a historical epic, the film is intimate, full of lovely touches and gentle humour. Bertolluci’s direction is masterful. Witness the key scene in the ballroom where the Emperor (newly made the ruler of Japanese state Manchuko) is watched from the sidelines by his embittered wife the second consort Wen Hsui, who in a scene of increasing tension, sits stuffing flower petals into her mouth. As we watch, the camera swoops, glides and moves along with the rhythms of the Emperor Waltz.

As the film moves on to the next phase of Pu Yi’s life, we see him in prison as the country of Manchuria is controlled by Russia after there Second World War. As the film ends, Pu Yi is freed from prison, just as the Red Guards are bringing in a new phase of Chinese rule.

The final scene is full of irony. The Forbidden Palace, where the Emperor spent the first years of his life in splendid isolation is now a tourist site. A small boy frees himself from the group and climbs on to one of the thrones. Pu Yi watches him and hands him a a container. Curious, the young boy opens it. Out climbs a grasshopper, presumably the same that the Emperor was given when he was crowned. Chinese politics will always change, but the soul of the country – as shown by the grasshopper- will endure.